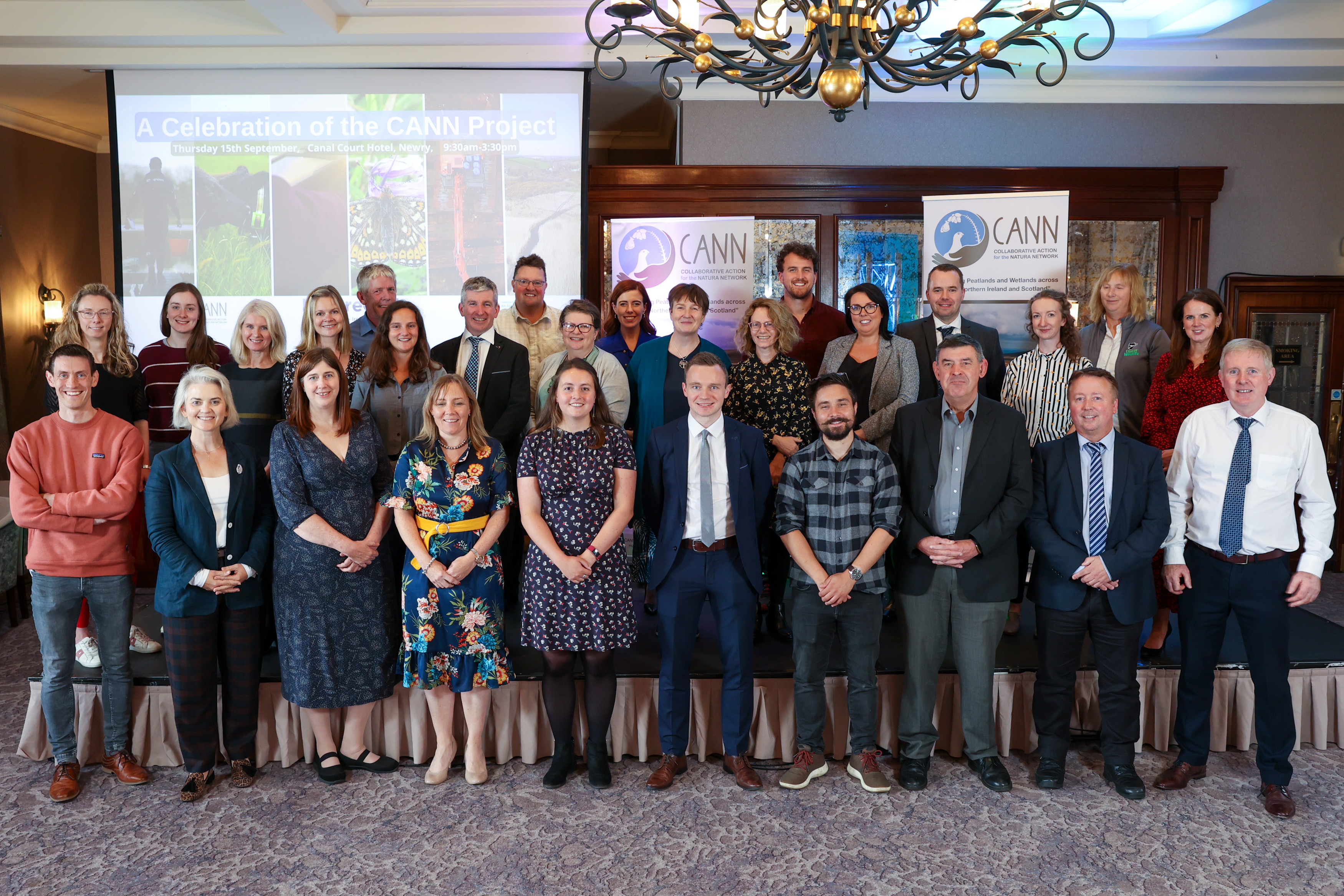 A major cross-border ‘Collaborative Action for the Natura Network’, or ‘CANN’ was acclaimed recently at a celebration event held in Newry, Co Down, attracting an audience from far and wide.

The €9.4m project was funded by the EU’s INTERREG VA Programme through the Special EU Programmes Body (SEUPB) together with funding from the Department of Agriculture, Environment and Rural Affairs (DAERA) in Northern Ireland and the Department for Housing, Local Government and Heritage in Ireland and NatureScot in Scotland.

The CANN Project Closure Celebration, held at the Canal Court Hotel, is the culmination of 6 years’ work which has helped to restore natural habitats and protect endangered species across a range of project sites throughout Northern Ireland, Ireland and Scotland.

The celebration event featured a key note speech from Professor John Barry of Queen’s University, Belfast who spoke passionately about the twin crises of biodiversity loss and climate change and their close interlinkages.

Throughout the CANN project, a team of leading scientists, researchers, local authorities, and charities from a partnership of 11 organisations across the three regions have worked together to prevent this decline in peatland and wetland habitats. As a result, 26 Conservation Action Plans have been produced across the three project regions. The project is led by Newry Mourne and Down District Council and employs over 30 project staff.

The CANN Project Team has carried out direct conservation actions to improve the condition of these habitats, helping to protect vital species. It has worked with local people and communities to manage these unique landscapes and iconic species. The project focussed on seven protected habitats, along with seven priority species, including birds such as the hen harrier, golden plover and red grouse, insects such as the marsh fritillary butterfly, and freshwater species such as white-clawed crayfish.

I am delighted to celebrate the successful conclusion of the INTERREG VA funded CANN project and its vital work to restore important wetland and peatland habitats across Northern Ireland and beyond to support nature recovery and ecosystem restoration. Healthy, functioning ecosystems will be crucial in the fight against a rapidly changing climate

Through their partnership-led approach, CANN have developed a stakeholder focussed delivery model that will work towards meeting our ambitions biodiversity and climate targets. My department looks forward to continuing work with similar consortia to delivery nature recover and climate action in the future”.

“I am delighted that the CANN project has illustrated that successful results for nature conservation can be delivered across borders. The applied research, survey work, mapping and concrete conservation measures undertaken by the project have added to our knowledge of peatlands and other wetland habitats and species, and have delivered improvements at important sites in Ireland. The development of a shared understanding and capacity-building amongst project partners and competent authorities during the project and into the future is very much welcomed.”

“Geographic borders can impede economic and social growth and in the same way hinder environmental exploration and preservation. This INTERREG VA project CANN, allows partners from Ireland, Northern Ireland and Scotland to come together and produce real results through dedicated collaboration. The wildlife protected by this project roam much further than our man-made borders, and the EU is deeply committed to protection of the natural environment across the whole of Europe and this project is a great example of that commitment. The work done by CANN will have lasting affects for years to come and has significant potential of future collaboration locally and internationally.”

“To be lead partner in such a prestigious and successful partnership as the CANN project has demonstrated the skills and flexibility of our local authority in this central role. I am proud to see the successes of this project bringing together diverse organisations including charities, academic institutions and government departments from across Ireland, Northern Ireland and Scotland. Working together we can be stronger and more effective than if we work alone.”