The CANN project team will be undertaking conservation actions to conserve eight priority species which are considered to be endangered, vulnerable, rare or requiring attention according to the EU Habitats and Birds Directives. These actions will help to safeguard the future of some of the UK’s, Ireland’s and Europe’s most at risk wildlife.

The white-clawed crayfish is a bronze coloured crustacean that looks a bit like a lobster. It has pale undersides on its claws, giving it it’s common name. It is the only native crayfish species in the UK and Ireland and typically lives in freshwater habitats which are rich in minerals. It needs these minerals to strengthen its exoskeleton, much like humans need calcium to strengthen their bones.

A significant proportion of the European population of white-clawed crayfish is found in the UK and Ireland. Whilst the population has a very widespread distribution, the species has been in rapid decline. As a result, it is very rare and seriously threatened to the point of being at risk of extinction.

The absence of crayfish plague in Northern Ireland is significant in helping safeguard the continued survival of this species. White-clawed crayfish populations at CANN project site Kilroosky/Magheraveely lake cluster are hydrologically isolated. This helps to protect them from the spread of crayfish plague, but doesn’t stop it. Crayfish plague spores can remain active on damp freshwater gear (e.g. fishing equipment, waterproof gear, kayaks etc) for up to 22 days, so good biosecurity is required to prevent the spread.

Species conservation measures include habitat management, limitation of plague and invasion through effective restrictions and education, and research to better understand the impacting issues and to make informed improvements. 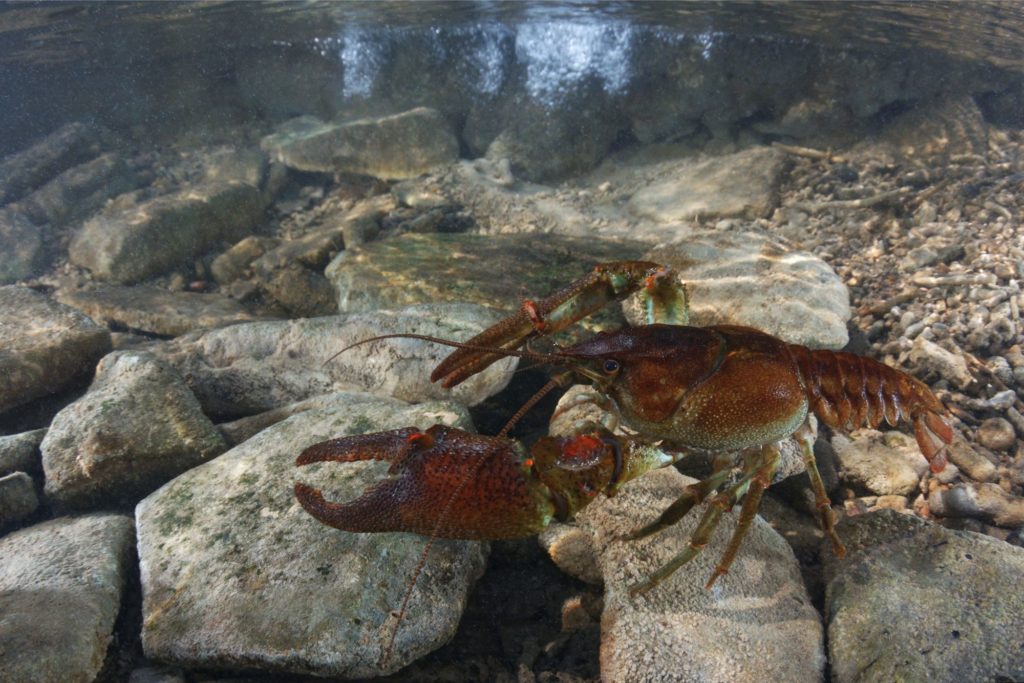 The hen harrier is a bird of prey from the hawk family. The males are blue/grey with a white ring on their tail and black tipped wings, whilst the females and juveniles are brown with a white rump, and a banded tail; both have owl like faces. They have a notable wingspan: up to 109cm in the males and 122cm in the females, and are masters of impressive flight displays; swooping, twisting, falling and gliding, hunting out smaller birds and mammals.

Hen harriers utilise a mosaic of habitats for hunting, and choose to inhabit open areas with low vegetation such as grasslands, farmlands, uplands and wetlands. They nest on upland moors favouring areas with heather as ground vegetation, and winter in the lowlands. Hen harriers are in serious decline, both in population numbers and across their range. They are the most intensively persecuted bird of prey in the UK and Ireland; the cause of this conflict being the effect hen harriers can have on grouse numbers, especially on or in proximity to managed game moors. Afforestation in upland areas also threatens their habitat and the population numbers. 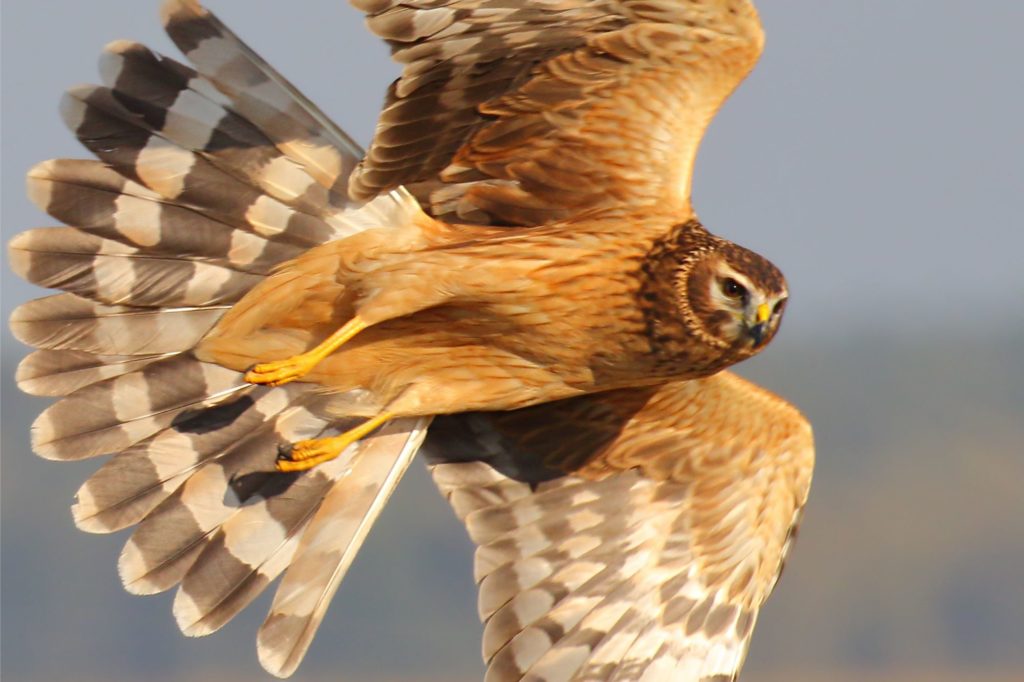 The curlew is the largest European wading bird and is instantly recognisable by its long, down-curved beak and its unique distinguishable call. They can be found in the UK and Ireland all year round, with both resident and overwintering populations.

The breeding population of curlews is of international importance, and the UK and Ireland hold up to 25% of this population.

They inhabit grasslands, heathlands or moorlands, farmlands, wetlands and coastal areas, choosing dry nesting areas with wet areas such as wet grasslands and upland moors for feeding whilst breeding, and coastal areas when not. There are high levels of decline in the breeding population of curlews, with the main threats including high rates of predation on nests, intensification of farming, and afforestation of moorlands. 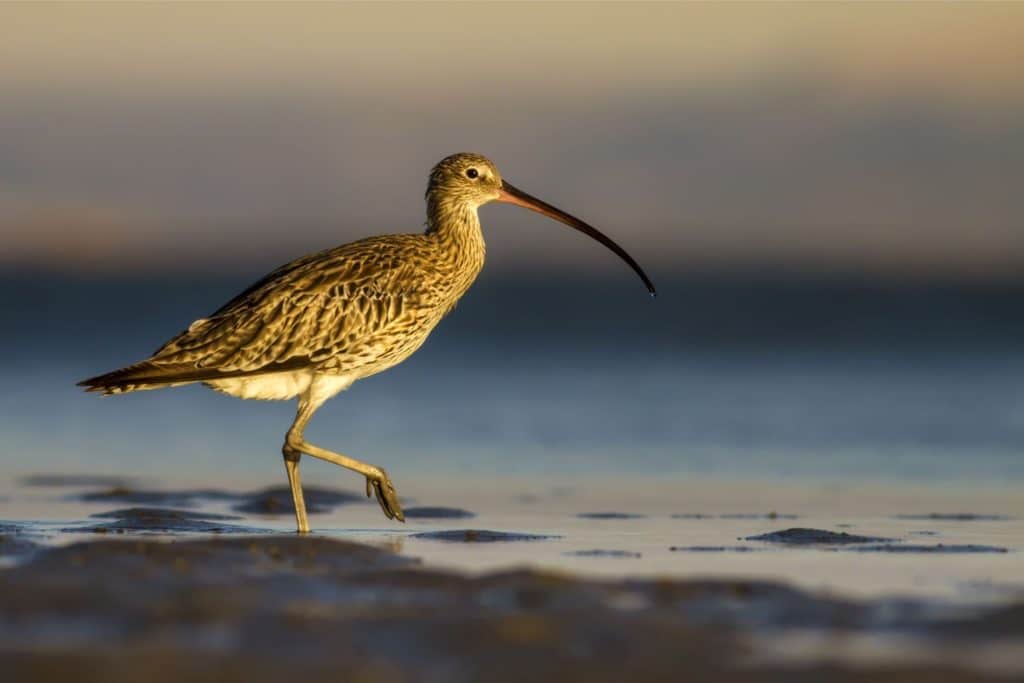 These speckled brown birds have bright red/orange legs and a long beak which fades from red to black at its point. Although there is a resident population of redshank in the UK and Ireland, they arrive in large numbers from Iceland during the winter and they can be found overwintering along the UK and Irish coastlines around coastal lagoons and estuaries.

Redshanks pair for life, returning to the same nest site every year, preferring to breed in damp places such as marshy grasslands, uplands and wetland habitats which allow them to probe their beak into the soil and mud easily to find insects, worms, and molluscs to eat. The drainage of wetland sites and land use changes are contributing to the decline in redshank numbers in the UK and Ireland. 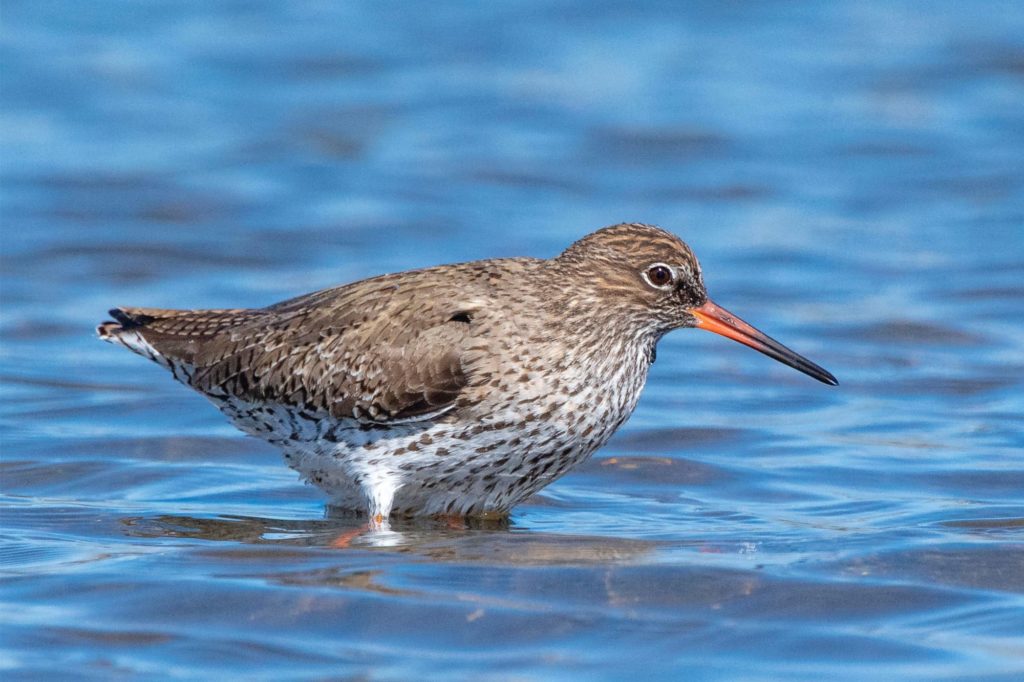 Often seen perched on fenceposts, snipe are mottled brown birds with an intricate pattern of gold and black stripes or bars in their plumage, and have short legs and a very long straight bill. This long beak has a flexible tip, which allows the snipe to find food such as small invertevrates, worms and larvae underground.

Snipe numbers have reduced by approximately 60% over the past 20 years due to steep declines in their preferred habitat types, especially at lowland sites. Snipe prefer habitats such as farmlands, grassland and wetlands, and are more likely to be found in higher densities on upland sites. They tend to breed on moorland or in fields with mosaic habitats as they do not like to fly for fear of giving away their nest location. 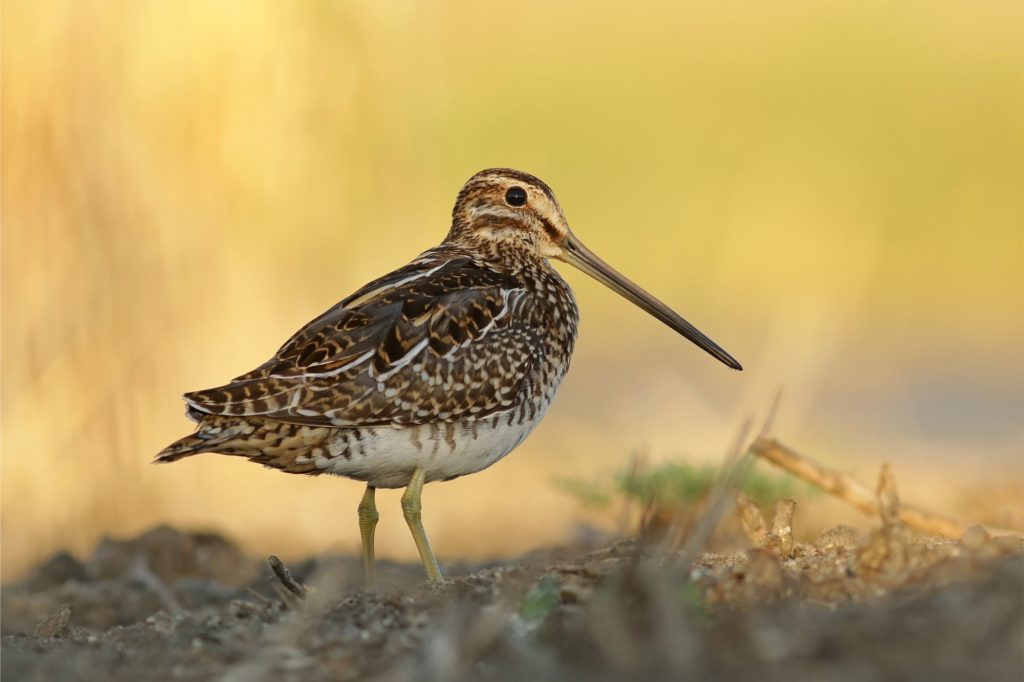 The golden plover has a very distinctive gold and black plumage during the summer months, and during the winter the black is replaced by buff and white plumage. They form tight flocks and fly in very tight formations.

They overwinter in lowland fields, where they are often seen with lapwings. In the summer they occupy upland moorlands, nesting on open ground among heather and grasses. They are in decline as a result of the destruction of their habitats and food sources, through afforestation, intensification of agriculture and changes in land use and land management. 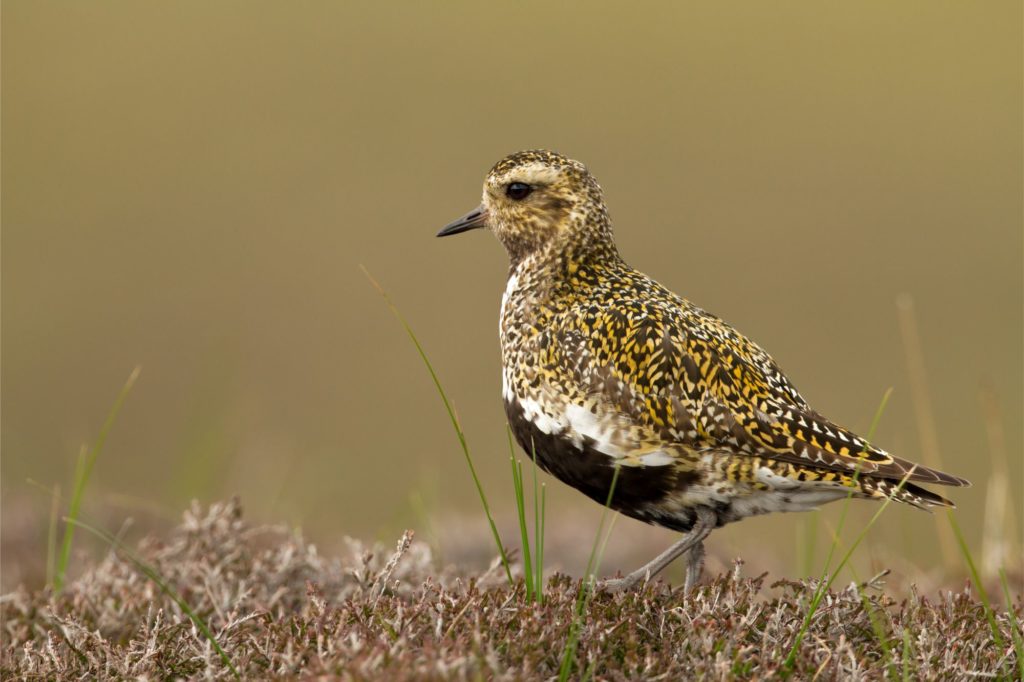 The red grouse famously appears on the “Famous Grouse” whisky bottles as a bird synonymous with the peatlands of Scotland. These medium-sized game birds, with their reddish-brown plumage, are not just native to Scotland but can be found throughout the UK and Ireland.

However, the population of red grouse is in decline as a result of continued deterioration and loss of their upland heather moorland and blanket bog habitats. Heather moorlands and blanket bogs are in decline for a number of reasons, including afforestation and overgrazing by sheep and deer. This coupled with the threat from predators such as foxes, crows and raptors and a viral disease transmitted by ticks which affects chick survival rates, means the red grouse population is very vulnerable. 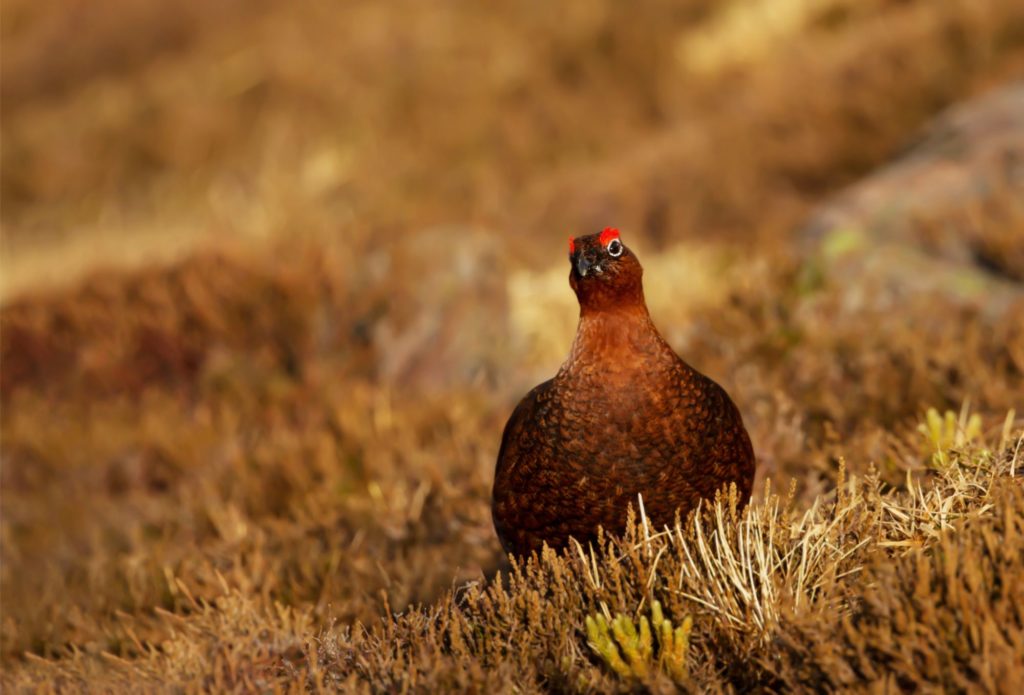 The beautiful marsh fritillary butterfly is found on a number of CANN project sites, and is in urgent need of conservation across Europe.

Once widespread across much of Europe, the marsh fritillary has seen a drastic drop in numbers over recent years. This decline is thought to be caused by losses of suitable habitats, habitat fragmentation, and unsuitable land management practices. The marsh fritillary need larger areas of habitat to support a long-term population, and cannot persist in highly fragmented habitats. 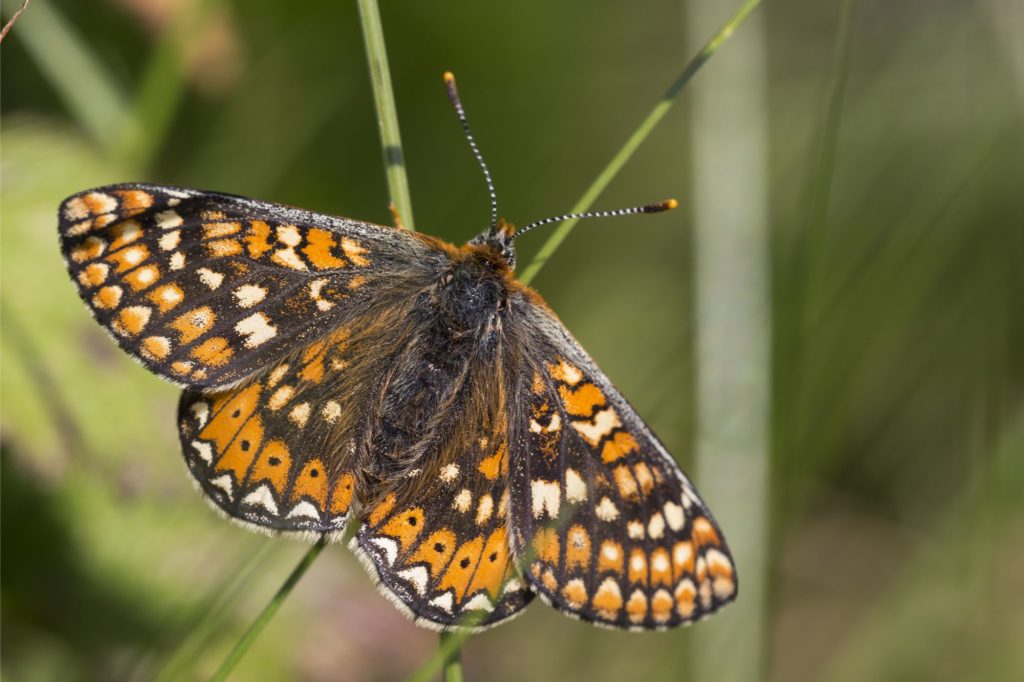