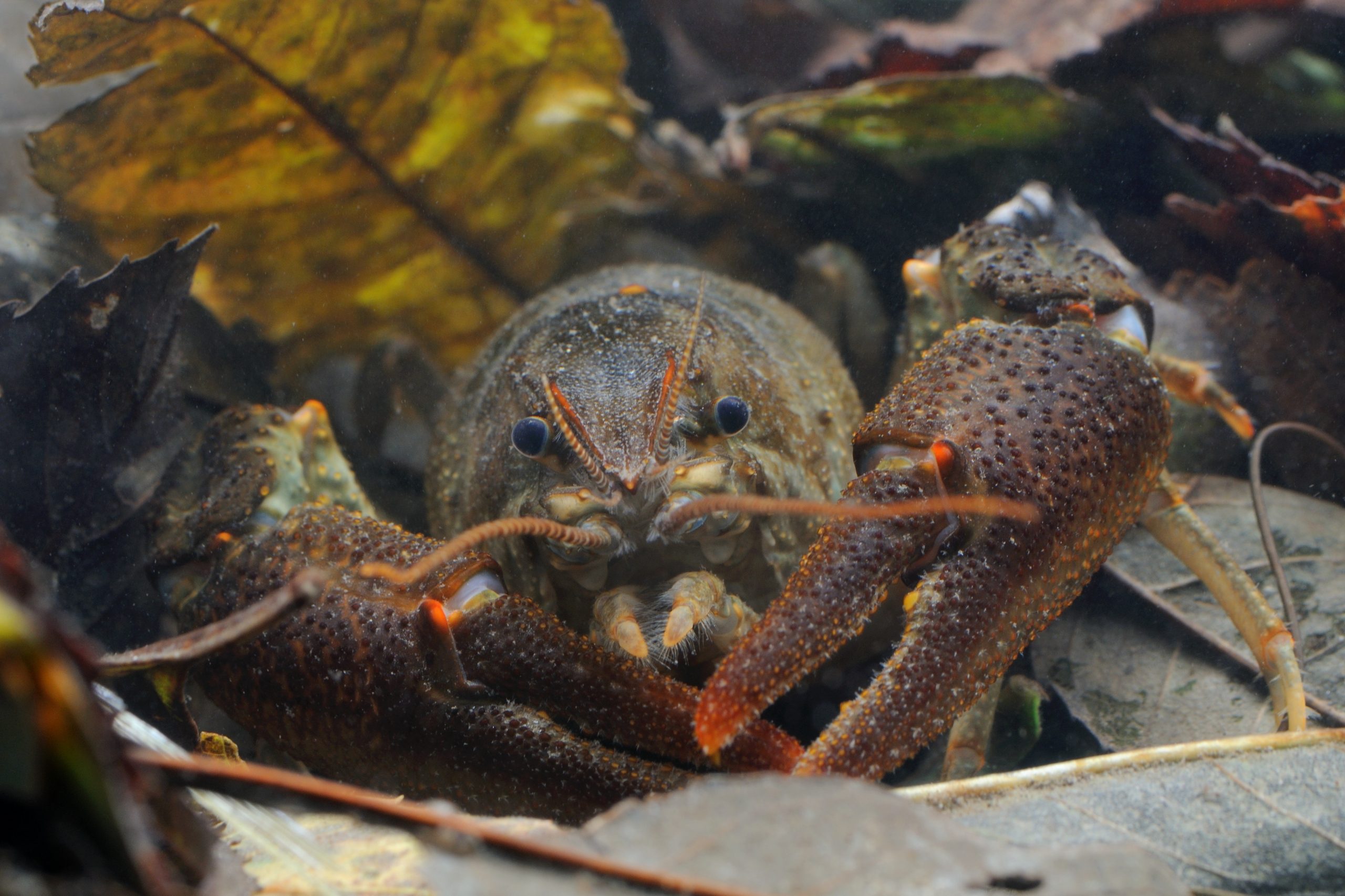 The CANN project has recently halted its plans to re-locate white-clawed crayfish populations within the network of lakes at Magheraveeley-Kilrooskey. Only one of the lakes (Horseshoe Lake) holds a crayfish population above the threshold for favourable status, but even this is on a declining trajectory. The threshold is measured as catch per unit effort (CPUE) and should be above one. At Horseshoe Lake, catches have been, on average, just above one cra 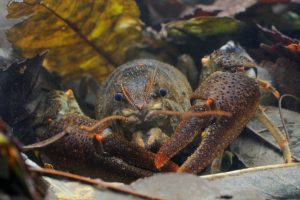 yfish per trap depending on season and surveys at Dummy’s Lough, the only other lake with a substantial population, typically return CPUEs at well below one.

Evidence over the last five years has found that future translocation of this species is not a feasible plan and indeed that a previous translocation attempt has failed. Between 2013 and 2015, an attempt was made to move crayfish from Horseshoe lake to Knockballymore; however, surveys have not found a single crayfish in the new site. In addition, the project has found invasive zebra mussels on the lough, which indicates connectivity with other water bodies meaning that crayfish plague may also have moved in and could have played a part in this failure. Angling activity could also have transferred Crayfish 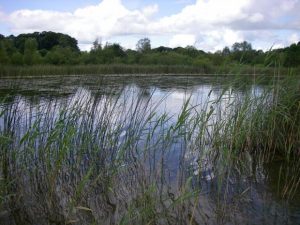 Plague. Anecdotal evidence shows that the angling stands attract anglers from far afield. It is almost impossible to control this access or behaviours that might transfer invasive alien plants and animals.

With populations so fragile, only waters with no connectivity to other lakes or rivers and no fishing stands can support good crayfish populations or become ark sites.

A further blow to the plans has been discovering that all the potential target lakes and even the donor sites are under pressure from nutrient enrichment. The lakes appear to have accumulated nutrients over decades. Their lower and colder layers of water (hypolimnia) tend to become anoxic or even anaerobic during summer’s thermal stratification. This stratification results in nutrient mobilisation from the lake sediments, enabling large seasonal algal blooms.

In short, we would advocate efforts to mitigate nutrient, pollution and potential pathogen transfer and mitigation of the internal nutrient loading before embarking on further crayfish translocation 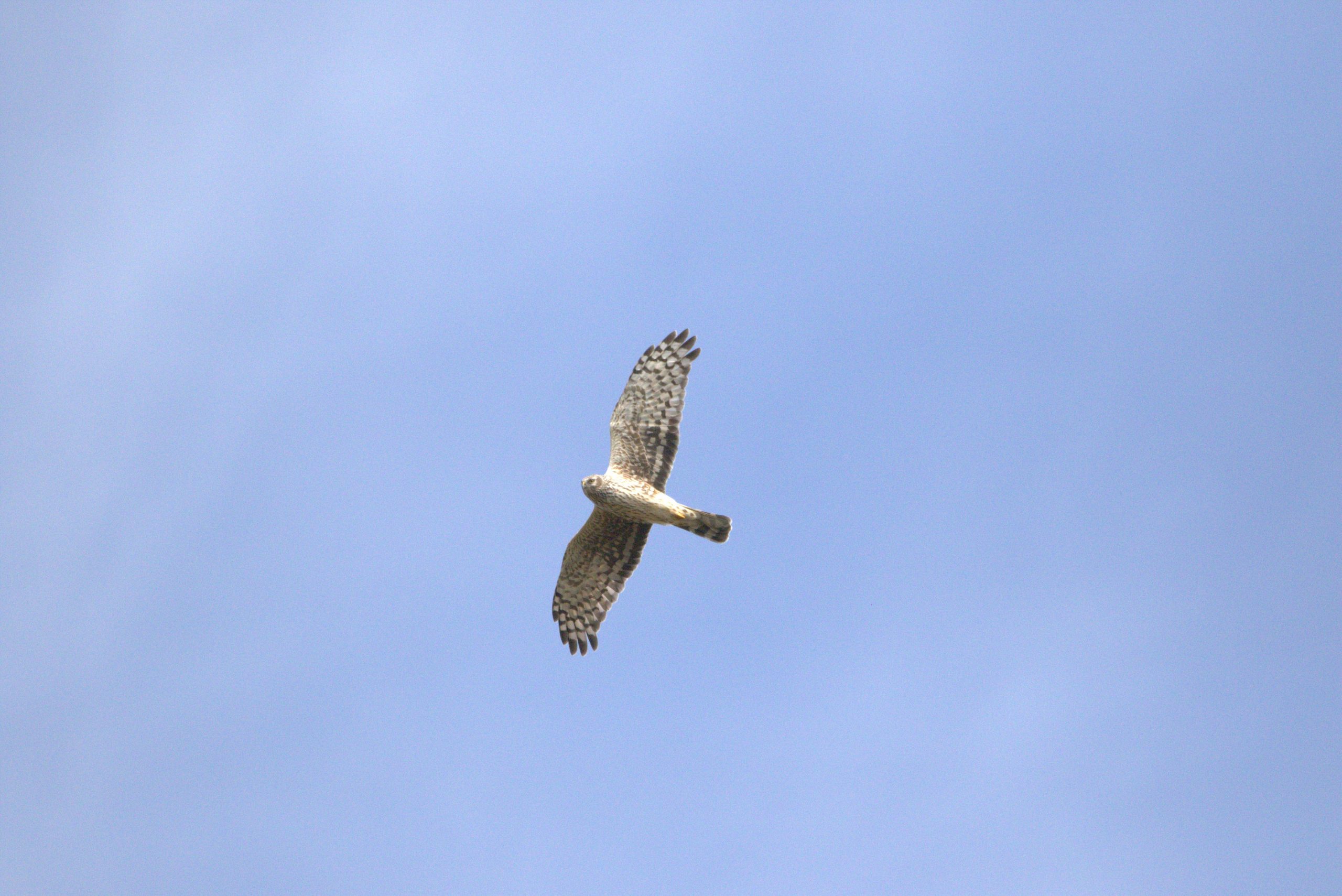 The Hen Harrier, the Sky-Dancer, is one of the most enigmatic species that inhabit the mountains and moors across Ireland, Northern Ireland and Scotland. The CANN project is working across all three jurisdictions to understand and manage some of the interconnected issues that face this and other species across peatland and moorland habitats. 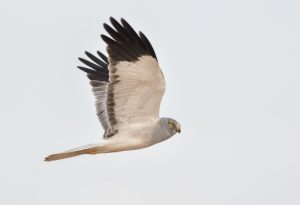 The species faces many threats and pressures across the range in these jurisdictions leading to direct loss and displacement of hen harriers which are a vital component, indeed barometer, of a healthy upland ecosystem. The cry of the curlew and the drumming of snipe have also diminished or vanished across their former strongholds.

Five-yearly or ten-yearly surveys of the hen harrier have revealed ongoing declines and range contractions for many decades. Trends identified in national surveys forecast more decreases in the coming years.

The hen harrier in Northern Ireland, in 2016, numbered fewer than 50 pairs. Across the island of Ireland, there are fewer than 200 pairs. The reality is that the population has declined in each sequential survey over the last decades. Even within the Special Protection Areas (SPAs) designated as species strongholds, the population is declining rapidly. We should be able to do better. We should be able to support and conserve this species more. We MUST be able to do better.

There is a huge range of threats to this species and its habitats. The hazards this species faces on this island include land management issues such as over-grazing and land abandonment, wildfires, habitat fragmentation, livestock trampling of nests and turf cutting. Human recreation also puts intolerable pressures on these birds: disturbance at nest or roost site from car rallying, off-road motorbikes and vehicles and dogs being walked or trained off leads. Commercial forestry with its abundant fox populations causes increased nest and fledgling predation. Even the ostensibly “green” energy solution of wind farms can lead to collisions and displacement. And to top off this list of “accidental” problems, there is, of course, illegal persecution.

In Ireland, some of the declines could be the effects of illegal killing across the Irish Sea – being felt keenly here too, perhaps? There is lesser evidence of direct killing on our own shores, but the birds move so freely between the nations that undoubtedly the trends may be linked. While known persecution incidents are few on the Emerald Isle compared to Britain they do occur for sure. Shot hen harriers have been posted to newspaper offices, satellite-tagged hen harriers have been shot and left to rot on the ground, and nestling hen harriers have been clubbed to death.

As an integral part of the CANN project, the team has been working to understand the species’ complex spatial and temporal requirements at various sites across the project area. The CANN project implements localised management for this and other species across peatland habitats. Works have taken place to identify the occurrence of hen harriers and their usage of a range of lowland raised bogs across Northern Ireland and border counties of Ireland and on upland regions of Cuilcagh Mountain, Sliabh Beagh and on the Scottish Island of Islay.

Locally we see an extensive loss of natural moorland sites, no remaining deep heather for nesting, obliterated by successive fires. Habitat loss, habitat degradation, poor quality nesting and foraging habitats ravaged over the decades. Other neglected and affected species, including the red grouse, the curlew, the golden plover, the meadow pipit, the snipe, the skylark, are also facing perilous declines.

Over recent years, the seasonal hen harrier surveys by the CANN project have discovered previously unknown hen harrier roost and nest sites, the locations of which are not fixed. We have examined the foraging range of many of the individual pairs of harriers within the project sites and shown how and where foraging ranges extend far beyond the designated site boundaries. Tracking the movement of birds has revealed that some tracked from Scotland roost in lowland raised bogs on the border counties of Ireland. We are all connected.

The CANN project has worked on the restoration of drained and damaged bogs to restore the densities of snipe and meadow pipits and skylarks feeding on the invertebrates increasingly abundant in the pools and dams created through restoration. These actions provide a better source of food and prey for the quartering, low altitude hen harrier, the ghost of the moor.

The CANN project has worked on fire planning, and building landscape and community resilience in tackling the multiple effects of fires in destroying habitat and damaging carbon sinks held preciously within the bogs. These spring fires are often exacerbated by turf cutting at an industrial scale.  There remains a way to go in the protection of these carbon-sequestering habitats and the careful, cautious use of firebreaks will contribute to the restoration of a heterogeneous mosaic of habitats. A fire-resilient landscape with its mixed heights is optimised for the red-listed red grouse with its “go-back, go-back” call; the edge habitats created by the breaks are great for nesting meadow pipits and the linear features themselves are much favoured by the hunting harriers.

The CANN project has implemented nest protection measures to give Hen Harriers the best chances of fledging young. The current ecosystem, unbalanced by generations of landscape change and afforestation, has an unsustainably high number of predators like foxes, so these need management to help hen harriers fledge more young chicks.

The CANN project has worked to rid the bogs and moors of a plague of self-seeded conifers from adjacent plantations and cutting and removal of the brightly coloured but deadly invasive rhododendron. Removing these misplaced trees optimises the moors and restores the unique openness of habitats much favoured by the hen harrier.

The CANN project has begun restoration and aims to set directions through conservation action plans for long-lived restorative actions to follow. However, there is much remaining to do. Creating connectivity between and within habitats is vital. These habitats and species cross borders: Ireland, Northern Ireland and Scotland – all are interlinked.  In recent years, however, there has been cause for optimism. The change in local attitudes and pressures which drove some of the past negativity is refreshing. In addition, the new biodiversity funding routes and Results-Based Agri-Environment Payment Schemes (RBAPS), increasingly operating in Ireland and beyond, are building an inherent cultural and financial value to all biodiversity, including the hen harrier.

The hen harrier has not been doing well, and remains vulnerable without ongoing, long-term support and actions. We all need to do our part. We need to celebrate it, support its habitats, and find ways to support the landowners, land managers and farmers privileged to work and live within its landscape. Agri-environmental schemes that have payments linked to the performance and productivity of hen harriers (and other species or habitats), that create a value to the increased number of young fledge, are an excellent route forward. These schemes support high nature value farming at its finest, with the potential to protect, enshrine and value both the land managers and the bird itself. Imagine a world where we all appreciate the hen harrier like that – as an integral part of the landscape. For now, we remain optimistic that the current realities can be improved.