Last week the team from CANN partners Argyl Coast and Countryside Trust (ACT) crossed the waters to visit peat bog restoration sites in Northern Ireland and Republic of Ireland. Due to Covid this was the first visit for some of the staff to any of the partner project sites and an opportunity to put real faces to names, email addresses and Zoom screens!

The first on the list of visits was a large blanket bog called Sliabh Beagh, spanning the border between north and south. The ACT team were met by Paul and Rory from Monaghan County Council, who walked their visitors up the hill, telling tales of local folklore (apparently Noah’s brother landed his own ark of animals nearby) and the group were honoured with a fleeting view of a hen harrier, the only one of the trip. Paul and Rory have been removing conifers that were drying out the bog and using peat dams, a system of ‘borrowing’ peat from nearby, to infill small sections of ditches to reduce drainage, all in efforts to return the bog to a wet, healthy habitat.

The next day the tour continued, this time teaming up with Simon from Ulster Wildlife to have a tour of their works at Peatlands Park, a country estate with an extensive trail system through a mosaic of gorgeous woodlands and raised bog habitats. There is a large network of drains throughout the site, so hydrological mapping was done using LiDAR (a type of laser scanning) to help plan where damming should take place. The team checked in on the range of peat and plastic dams, getting some very wet feet in the process (surely a good sign that the damming is working!) and compared notes on Islay’s efforts with rhododendron removal (something that has been a key deliverable on the island!). Ulster Wildlife are monitoring effects of the restoration

work using piezometers, an instrument inserted deep into the ground which measures the water table using data loggers.  Some of these are automatically taking measurements every 15 minutes! This gives an insight into how the water table changes throughout the year and after restoration; a nice wet bog for most of the year will be more resilient to the hotter, drier weather events predicted due to climate change.

The tour then took the team up to Cuilcagh mountain with Roisin, also from Ulster Wildlife. Here they have been using a variety of methods to block gullies that have been caused by water eroding the peat. Coir logs made of coconut fibres are dug into the base of the gullies, slowing water flow. Cut heather is spread over areas of exposed peat to stop it oxidizing and releasing carbon into the atmosphere. They have even been trialing a new method of gully blocking, using wool from the very sheep that graze the mountain. The wool is used to create a bale which is then used to block gullies much

For the final two days of our trip ACT joined forces with a range of CANN staff as well as other outside projects interested in bogs. Again, more trips out onto bogs, but many of which are managed by community groups. One such was Abbeyleix bog which was saved from further peat extraction by its locals. They now manage the area and its diverse surrounding habitats, liaising with universities to carry out research and organising work groups for everything from boardwalk maintenance to habitat creation for marsh fritillaries. It was inspiring to witness the hard work and passion that has gone into managing the area for the benefit of the environment, but also for the enjoyment of the local community, all co-ordinated by volunteers.

All in all, it was a highly education trip and the ACT team has have come away brimming with ideas and enthusiasm to continue their work with bogs, back on our home peat of Islay and Argyll. 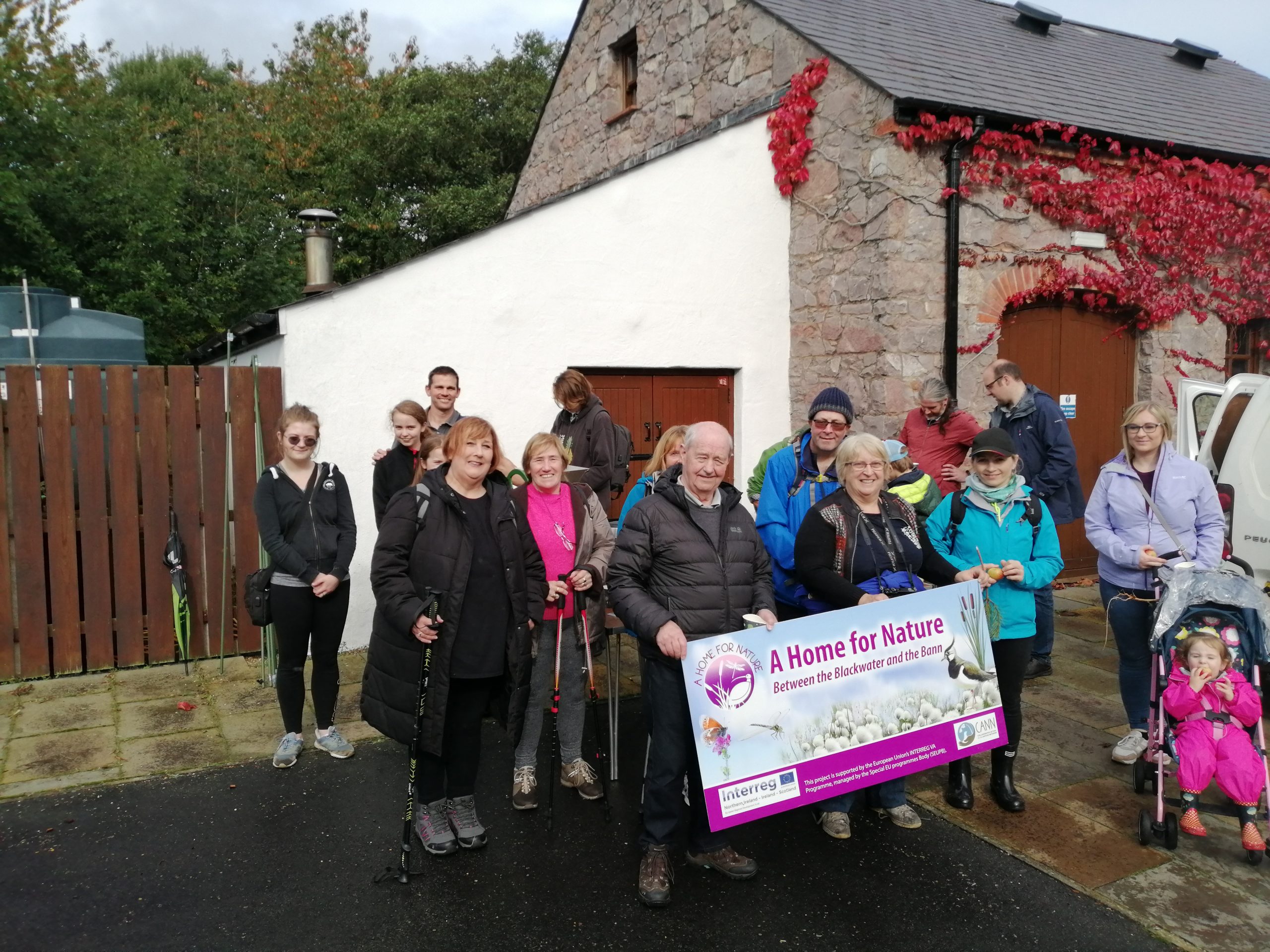 Local people enjoyed a guided culinary and foraging walk around Peatlands Park this week and had the opportunity to brew their own pine needle tea and produce their own apple juice.

The event was organised by a new environmental grouping established to celebrate and protect the important wildlife habitats between the River Blackwater and the Bann. The development of the group and its lively programme of events is part of the outreach work of the CANN project, which is delivering conservation work restoring the raised bog on the site through re-wetting and clearing of invasive rhododendron. This was one of a series of events that are all advertised on Facebook, search for https://www.facebook.com/HfN.BlackwaterBann to find out more.

People of all ages took part in the exploration, enjoying the last sunshine of autumn (along with a couple of showers), and tasting some of the riches of the season. 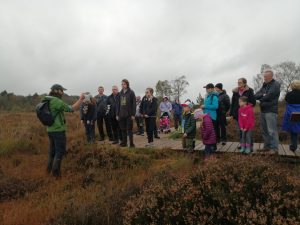 “Our guide, Daniel Monaghan,  a local teacher and story-teller,took us on a walk around the park and explained the different habitats of bog and woodland here at Peatlands Park. We learned about the properties of sphagnum moss and the role bogs can play in combating climate change” said Paul Higgins who lives locally.

“On the way round, we gathered pine needles and apples from the local heritage orchard and sampled our own freshly pressed apple juice and enjoyed the refreshing taste of pine needle tea” he continued. 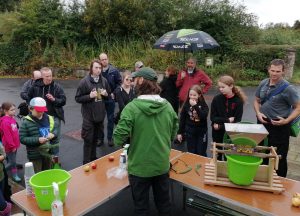 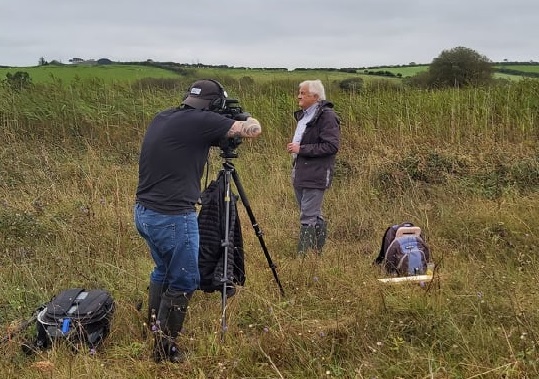 Since lockdown eased slightly, the work to create a video of the CANN project has been progressing. Before lockdown, we filmed some fabulous footage of the skilful digger drivers blocking old drains at Cranny Bogs. The diggers rest on huge wooden bog mats which weigh over a tonne each, these are moved by the machine operator as he progresses across the bog allowing the machines to continue work even when the bog is like a sea of jelly. To see these huge machines delicately moving peat from sacrificial pits to block the drains is quite amazing.  ASG, our video contractors, are getting used to the soggy feet of working on wetlands and now bring wellies as standard. They were thrilled to film a demonstration of our Robocut machine which, working by remote control can get into areas which are unsafe for a ride-on cutter (and cameramen!). The machine has been a huge hit with farmers wanting to find out how to manage their land better for biodiversity.

During the main part of lockdown, filming was postponed but as soon as it eased the cameras were back 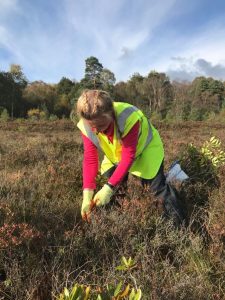 on the job using skilful drone work and pared-back crew to ensure social distancing and safe working practices. Their first date was in Peatlands park where volunteers from the Lough Neagh Landscape Partnership were pulling scots pine seedlings out of the bog and cutting down young rhododendrons.

The team also got close up and personal with a licenced filming of young hen harriers at the nest on Sliabh Beagh and had a meeting with lovely traditional breed cattle on the mountain, these Dexter cattle 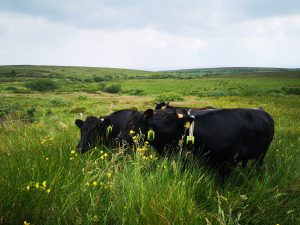 act like mobile conservation rangers, they are light enough to not get bogged down and will eat the roughest of vegetation, they are also incredibly photogenic with their big dark eyes.

A trip out onto Lough Arrow was carefully carried out to avoid close contact with our scientists. Clever camera angles to mimic the camera being on the boat complete with drone footage demonstrated water sampling and the laying of jute carpets to control alien invasives and encourage native charophytes.

Laden with gear, the team climbed to the top of Cuilcagh Mountain and were able to film the delicate work of restoring the unique boreal and subalpine heathland on the peak. This habitat has sadly been a victim of its own popularity being eroded away by the thousands of visitors climbing the boardwalk. Still, our fabulous contractors were able to show the film crew how they put together the giant rock, plant and soil jigsaw, searching for exactly the right shape of stone to fit.

On Lecale fens just outside Downpatrick, the team got the macro lenses out to film the tiny Desmoulin’s whorl snail and the webs of the beautiful marsh fritillary butterfly. Filming is in the home stretch now, and a trip to

Scotland in October will tell the tale of making Colonsay Island a rhododendron-free island and find out about surveying birds on the loughs and mountains of this beautiful area. The final filming will be with the Ulster University team surveying white-clawed crayfish on the Kilroosky lake cluster near Clones.

We are looking forward to seeing this lovely video when it is finished it has been a long time in the making, but we are sure it will be worth it.