A jury of 1000 European citizens is working hard to single out this year’s most innovative political projects, and The CANN (Collaborative Action for the Natura Network) project, led by Newry Mourne and Down District Council, is through to the finals! The prestigious Innovations in Politics Awards, now in its fifth year, asks politicians from all over Europe to submit their most outstanding political initiatives over a range of themes. Cathy Mason, the chairperson of NMDDC, nominated the CANN Project as an exceptional example of partners working together across borders to develop practical solutions to the urgent problems of climate change and biodiversity loss.

“Details of the huge range of work being undertaken by the CANN project in our district and others, in a swathe from Sligo to the Highlands of Scotland impressed me,” said Cathy Mason

“However, what immediately struck me was the strength of the partnership, and the way councils, charities, academic institutions and government departments are working together, showing real political leadership,” she continued.

The CANN project is a finalist reaching the last ten in the Ecology section of the awards, whittled down from over 400 entries across Europe. The winners of each of the nine categories will receive one of the coveted trophies in a special awards ceremony held in the New Year. 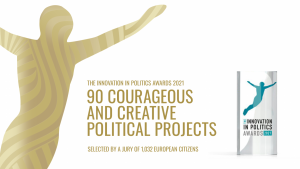 The CANN project aims to improve the condition of protected habitats and to support priority species found within Northern Ireland, the Border Region of Ireland and Scotland, allowing the region to meet key EU biodiversity targets and ensuring the future of these internationally important habitats and species.